Now that the first step in making bisi bele bath has been completed successfully, the next step is to prepare the rice. With little preparation ahead of time, making bisi bele bath can really become a breeze. I usually have cooked rice and toor dhal in my fridge, which saves me a lot of time on weekdays, when we constantly are running short of time.

END_OF_DOCUMENT_TOKEN_TO_BE_REPLACED

Posted by A-kay on March 16, 2010 in Cooking, Desi, Traditional cooking

Goa – I am not sure about you, but the mere name conjures up images of blue sea, clear sky, pristine beaches and everything exotic. When I heard about Goan Pulao from a dear friend of mine, needless to say, I was thinking of everything exotic – exotic spices, flavors, what not. Exotic, rich flavors in this dish makes it stand true to its name but surprisingly these flavors come together to make a very simple, satisfying dish.

END_OF_DOCUMENT_TOKEN_TO_BE_REPLACED

The second book chosen for both Cook’s book club and Thoughtful Thursdays were coincidentally the same – A Thousand Splendid Suns. After having read and liked The KiteRunner, I was curious to read the second book by Khaled Hosseini. It is one thing to impress with a well-written first book, after all there is no reputation at stake, but quite another to keep that up and come up with a winner the second time over. While I wouldn’t call this a winner, Khaled did not flatter to deceive.

The book, again set in Afghanistan, is the story of two very different women, one old enough to be the mother of the other, and whose life touches and by a twist of fate, merges. The book, written from the perspective of Mariam and Laila alternatively, gives us a sneak-peak into a woman’s life in war-torn Kabul. The two women, married to the same man and forced to live together, slowly accept the presence of each other in their life, bond with each other over tea and end up caring for each other when the husband becomes their common nemesis.

END_OF_DOCUMENT_TOKEN_TO_BE_REPLACED

Last Friday was Karadayar Nombu. Thanks to Bollywood, its North-Indian cousin, Karwa Chauth is much more popular. Karadayar Nombu typically falls at the cusp of tamil month of Maasi and Panguni and can fall at any time during the day – be it the dead of the night or right during the middle of the day. Thankfully, this year the Gods were smiling and it was right in the morning.

For me, the best part of the Nombu is the prasadam. Sweet (vella) adai is made as the offering for this nombu, and I wonder, why we don’t make this on other days! To compliment the sweet adai, a savory (Kaara) adai is also usually prepared, and as I had family over for dinner I made pidi kozhukattai with Rosematta rice as well.
END_OF_DOCUMENT_TOKEN_TO_BE_REPLACED

How do you prepare for a lunch and an afternoon with strangers in person but you know them virtually? Will it be a quick luncheon for may be couple of hours with tall promises that we will keep in touch and meet regularly, but heart-in-heart you know that in all probability you will never meet them again? Well, these were some of the questions / thoughts that I was pondering on the morning of 16th February 2008, the day when the Bay Area Food bloggers decided to meet and eat, as said by The Cooker. In fact, what to cook was the easy part for me, thanks to Shankari – the organizer of the meet who sadly couldn’t make it. Well there was just one very simple rule for this event (similar to the very many blog events :)); the dish should be selected from one of the fellow Bay Area blogger.

END_OF_DOCUMENT_TOKEN_TO_BE_REPLACED

Chakkarai Pongal (Sweet Pongal) is a rice-dal based sweet dish, that is more of a snack than a dessert. It is made of rice similar to the payasam, but has the consistency of khichdi and is made using jaggery. Venn Pongal (White Pongal) has the same basic ingredient as the sweet pongal, but is its savory partner. Venn Pongal is a very popular tiffin/snack in South India. Of all the dishes that I know (or rather I can think of as I am typing this), Venn & Chakkari Pongal are two dishes that go well as a pair – a sweet one to balance the savory one. 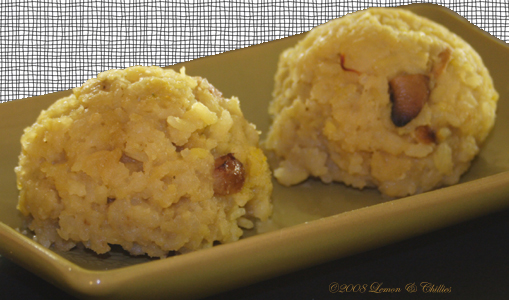 END_OF_DOCUMENT_TOKEN_TO_BE_REPLACED

Posted by A-kay on January 21, 2008 in Cooking, Desi, Traditional cooking

When I got married, and moved to the US as a new bride, my mom insisted that no matter where I am, there a few pandikai (festivals in tamil) that I should never miss. She staunchly believed that by celebrating these festivals, we carry forward our tradition and culture. Living in a faraway land, I guess that is the best way to preserve your identity and also teach / pass it on to the next generation. Even though, I don’t go the whole nine yards, I try to stick to the tradition as much as possible. To think that a few years ago, if someone said that I would be following all these traditions, I would have scoffed at them. But now, I never fail to celebrate Pongal, Karadaiyar Nombu, Gokulastami, Vinayagar Chathurthi etc. I guess age & experience can really change one 🙂
END_OF_DOCUMENT_TOKEN_TO_BE_REPLACED